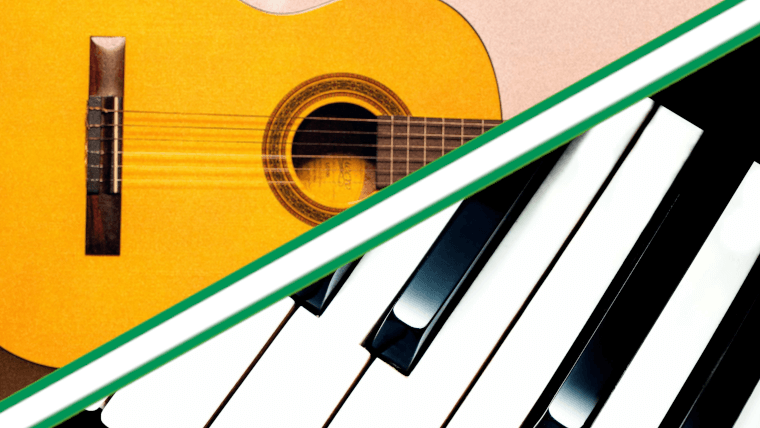 Guitar or piano, which one requires the most skill?

Well, the definitive answer to that is of cour-…

Hahaha, did you really think I was just going to tell you right away?

There’s a couple of different factors to it and I’ll go over all of them today.

If you’re reading this because you want to prove to your best mate that your instrument is harder than his, then you’ve come to the right place!

If you just want to find out how hard they both are so you can choose which one to learn, then you’re also in the right place!

Then you are even more so in the right place!

And yes, I am primarily a guitarist. (I think the name of the blog gives that away a bit lol)

But I’ve had many discussions with my friend who is an excellent pianist about this topic to make it a fair comparison for y’all.

So let’s get going, is guitar really harder than piano?

Getting Started & Their Learning Curves

Many of you will be pleased to hear that guitar and piano are both relatively simple to start.

Hundreds of millions of people all over the world play either piano or guitar or both so neither can be that bad, right?

But I’d say piano is probably the simplest at the very beginning.

I mean, you can play simple stuff like Mary Had a Little Lamb just by pushing keys down with your index finger.

And it doesn’t get much easier than that.

So you could easily be playing some tunes by the end of your first day.

However, it does get a bit more difficult with chords and bringing a second hand into the mix… though it’s still pretty straightforward overall.

But with guitar you have to program your fingers to get used to unnatural and weird-ass chord shapes which make you want to jump on it and throw it in the fire.

Make sure you don’t do that.

You’re just gonna need some patience whilst you build up finger dexterity.

And adding to this, your fingertips may hurt for a bit in the beginning.

You’re telling me! This hurts like hell dude, why didn’t you warn me earlier?

Because I knew you’d be a wimp about it…

You get the idea, the initial learning curve is much steeper than piano.

But within a month of playing, these chords will feel natural, you’ll have tougher tips and you’ll be able to play loads of songs using these chords.

How Long Does it Take To Play Songs?

Alright, so that’s the whole reason you want to play guitar or piano, isn’t it?

In my opinion, learning songs on it is slightly harder.

Most songs will require you to play the backing chords and the main melody at the same time with different hands.

And this in itself is a skill to train.

Getting good at coordinating your hands to do two different jobs will take some practice but once you’ve got this down, the world will be your oyster.

However, I think guitar is easier because you only really have one part to play.

We tend to play rhythm and lead separately since we don’t have enough hands to do both at the same time.

And if you want a lead vocal melody whilst you play the chords, you can always sing it.

In fact, those chords you’ve learnt in the beginning will let you play almost any pop song.

Whether it’s some up-tempo Guns N’ Roses or high-octane Do You Wanna Build A Snowman?, you can bet those beginner chords will carry you through.

And obviously a technical jazz standard or fiery metal guitar solo would take much more practice, and so would a Chopin piano piece…

But in terms of playing lots of songs fast, I think guitar takes this one.

How Long Do They Take To Master?

Is it harder to master guitar or piano?

And the answer is…

The are both as hard as each other, but in completely opposite ways.

To become a piano virtuoso, you’ll need to master the contrast between soft and hard, quiet and loud, massive stretches sounding effortless and everything to sound “just right”.

On top of this, you’ll want to have the ability to spin off some fast, scalic runs when called for and be able to look at a piece of music and play it.

But meh, that ain’t too hard. It only takes a few thousand hours of practice.

However, the demands of guitar virtuosity are very different.

Guitar either sounds loud or loud because you’re often with a band meaning dynamics aren’t as important.

But having the ability to play fast, use a bunch of different fancy techniques like tapping, and keep everything as clean as freshly mopped floor whilst you’re at it are staples of a pro.

And improvisation is also a mahoosive part of guitar.

Being able to solo over chord changes and play impressive stuff all over the fretboard in any key off the top of your head isn’t something that just comes with talent.

In a nutshell, virtuosic guitarists have learnt to make the guitar sing.

Wrapping it Up, Which is Harder?

Here’s the thing, neither guitar nor piano is gonna be as easy as falling down the stairs, unfortunately.

But it won’t take as long as you think to actually start playing stuff.

If you practiced 15 minutes a day for a month then you’d be amazed at how far you’d get.

The long and short of it is, that piano is a bit easier in the beginning but playing proper songs is more difficult.

And guitar is more difficult in the beginning, but once you’re past that, a whole world of songs opens up.

So they are both harder than each other at different points, the choice is yours.

And finally, both are as difficult as each other – but definitely not impossible – to master.

Boom! Now you can go and prove to your best friend that you play the harder instrument and laugh in their face.

Or maybe you’ve made your mind up of which one you want to learn.

P.S. If you want to take your first guitar lesson and learn how to play guitar for beginners then you can view my post on that by clicking here.

How to Play 9th Chords on Guitar Fast